Herm Edwards, the current head coach of the Arizona State football team and former NFL player and head coach, is a charismatic inspirational speaker who shares with his audience a special game plan which centers on the pillars of teamwork — work ethic, communication, integrity and legacy.

Edwards will share stories and motivational moments from his career that will certainly resonate with all who attend.

The lessons he has learned along the way and the impactful messages he has shared with his teams will keep any audience on the edge of their seat. Herm Edwards has a zest for life that is hard to match and is clearly evident in his dynamic presentation. 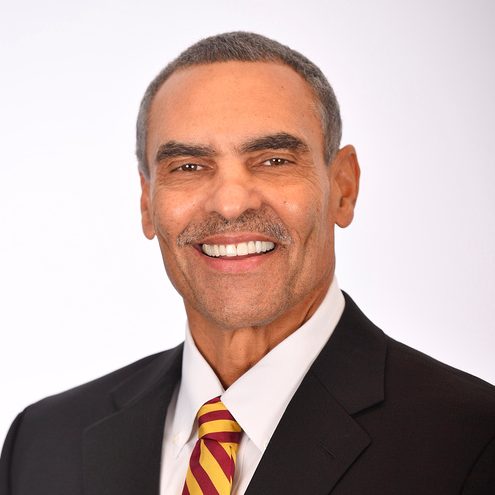 Whether it is his faith, his family or his football team, Herman Edwards exudes passion in all areas of life. Herm’s career is defined by his energetic and enthusiastic attitude, first as an NFL player and coach, then as an NFL studio analyst for ESPN, and now as the head football coach at Arizona State University. Edwards joined ASU in December of 2017 after nine years at ESPN. In his first season, Edwards finished tied for second in the Pac 12 South.

At ESPN, Edwards’ voice was fully integrated into all of the network’s platforms, from radio and digital to television. Edwards utilizes his diverse background in pro football to be one of the most informed and educated analysts on television. In 2013, Edwards was named the Team ESPN’s Commentator of the Year.

Also in 2013, Edwards joined elite company as a recipient of the Walter Camp Man of the Year Award. Most recently, Edwards was honored with the 2015 Shell Legacy Award, a recognition celebrating individuals with a legacy of charitable giving. Other notable marks in his career include speaking at the NFL Rookie Symposium and being featured on ESPN’s ‘Back to School’ segment in which he returned to his high school alma mater to coach for
a day.

Edwards is a military brat whose father served over two decades in the Army. Born in Fort Monmouth, New Jersey bur raised in Monterey, CA, Edwards enjoyed a 10-year professional playing career from 1977-86, spending the first nine of those seasons with the Philadelphia Eagles. He earned second-team All-NFC honors in 1980 and played an instrumental role on a hard-hitting Philadelphia defense that helped boost the Eagles to a berth in Super Bowl XV that season.

He totaled 33 interceptions for 98 yards with one TD during his tenure with that franchise. His 33 career INTs rank as the third-best in Eagles history, just one from the team record of 34. A shining example of dedication, Edwards never missed a game in his nine-year career with the Eagles. Edwards claim to fame was picking up the loose fumble by NY Giants QB Joe Pisarcik on the play known as the “The Miracle at the Meadowlands.”

Edwards concluded his NFL playing career in 1986 and secured his first job with the Kansas City Chiefs in ‘89 as the recipient of the club’s Minority Coaching Fellowship. Edwards is the first graduate of the fellowship to become the head coach of the franchise for which he served his fellowship.

In 2001, Edwards departed Tampa Bay to become head coach of the New York Jets. In five seasons as the Jets head coach, Edwards compiled a 39-41 record. Edwards was on the sideline for five postseason contests with the Jets, the best total of any coach in team annals. He registered 35 victories with the Jets from ’01-’04, tying Joe Walton (’83-’86) for the most regular season wins by any coach in his initial four years with the team. Edwards also led the N.Y. Jets to the postseason in his first campaign with the squad.